Before you read this: I’m only sharing my understanding of the conflict between Israel and Palestine and I will try to not take any sides here. From a traveler’s perspective, I do not believe in bans, but if you are wondering if you should visit Israel and/or Palestine (or not), reading this could help you make a decision. Before making quick judgments here, I strongly suggest you read until the end – especially the section about hope for a peaceful future.

If I’m honest, I always struggled to understand the conflict between Israel and Palestine. I remember watching videos, reading a bunch of news and still – it felt like so many pieces were missing.

In 2018, I visited Israel twice (I also went to the Palestinian West Bank) and I felt so overwhelmed with the conflict that I decided that it wasn’t the purpose of my travels, so it would be easier not to think too much about it. Innocent? Maybe, but I really couldn’t understand all the nuances. I’ve never been a fan of politics, what can I say.

This year, when I found out I was going to Israel again, I thought it could also be the right timing to try and understand the conflict once and for all. I tried again and I just couldn’t.

We had a few meetings with different organizations during this trip.

Finally, I was able to ask questions and get real answers from both sides. Unfortunately, many things we see on the news cover only one side of the story.

When I got back, I read more and more about it and finally, everything started to make sense.

In this post, you’ll find a list of facts about Israel and Palestine. Facts are neutral which means that no opinions will be expressed in this section. Then, you’ll find my “hope section” where we’ll be discussing initiatives for a potential peaceful future for Israel and Palestine. It might seem a bit overwhelming if you have no knowledge about the conflict or about Israel/Palestine. I suggest keeping an eye on the map below. This might help you.

Facts about Israel and Palestine Conflict 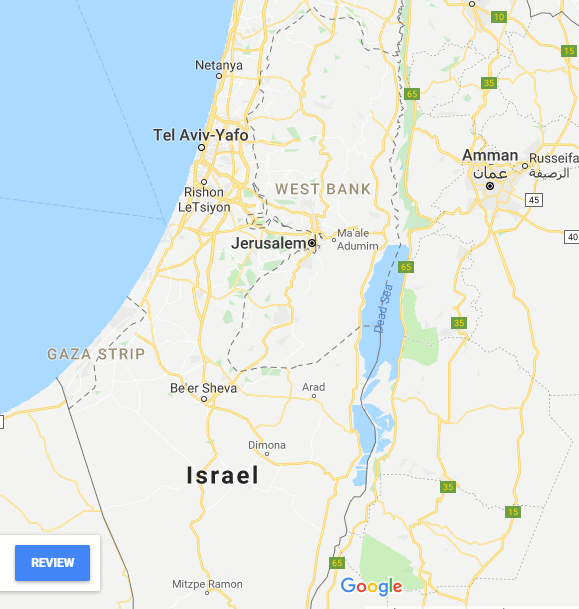 To understand the references to West Bank and Gaza Strip, check out the map. These areas belong to Palestine.

If you’re a bit like me you might have heard words such as “Gaza Strip”, “Zionist”, “Something about international law violations” and you might be wondering what is all this. Guilty here – being a non-native English, I even had to google some vocabulary associated with Israel/Palestine conflict.

The goal here was to “simplify” the history between the two. I really hope I won’t offend anyone here.

If you made it this far, it’s probably because you know that something is going on, but you don’t know the whole story. So, let’s go back in time a little.

The conflict is old.

The conflict between Israel and Palestine has been happening for a while. To give you an idea, the state of Israel was established in 1948. Although, between 1882 and 1948, Jews from around the world immigrated to Palestine. (The official name of Palestine started in 1917.) That said, throughout history, Jewish people have been living on this land which explains why they have been claiming the right to live there.

After the Holocaust, the need for a Jewish state was becoming stronger and stronger.

In 1947, the United Nations decided to divide the land (known as Israel and Palestine today) into three sections – there would be one for the Jews, one for the Arabs and Jerusalem would be an international trusteeship regime.

Imagine how it felt for those who were living there already – the Arabs. What was a “win” for the Jews also meant a “ lost” on the Arab side. The war started out and as a result in 1948, 700 000 Palestinians lost their homes.

Palestinians define this event as the “Nakba”.

Depending on the narrators you have two different versions of the story. One in which Palestinians were forced to leave their homes, and one in which the Arab leaders encouraged people to leave. That said, some Palestinians decided to stay in Israel. In fact, in 2013, 20% of Israel’s population was Arab.

In 1967, there was another major war and Israel took the West Bank and East Jerusalem from Jordan. This area is supposed to be the Palestinian territories according to the United Nations. Although, there were (and still are) many illegal Israelis settlements on these territories.

In 1993, a deal was reached to recognize both states. There was also the creation of the Palestinian Authority so they can act in the West Bank and the Gaza Strip. This peace agreement never happened in practice.

So, what happened? Well, long story short – there was the visit by Ariel Sharon, a soon to be Israel’s Prime Minister, to the Temple of Mount in East Jerusalem – which resulted in fear and the second intifada (the act of rebellion of the Palestinians against the Israeli occupation).

During the next 5 years, around 3000 Palestinians and 1000 Israelis would die including many civilians killed in suicide bombings. You should also note that all the suicide bombings happened inside of Israel in public places such as shopping malls, buses, restaurants, etc. That said, even if the numbers seem to be inequal at first, the percentage of civilians killed is higher on the Israeli side.

As a result, Israel retreated from Gaza, and Hamas (recognized as a terrorist leader by many countries) took over the Gaza Strip in 2007. You should know that Hamas was elected in 2006 by the Palestinians.

Hamas is the one responsible for all the rockets launched from Gaza against Israel.

The trust between Israel and Palestine became more problematic. Israel and Egypt decided to put Gaza under Israeli military blockade as a result. That said, it resulted in limited water, food and energy supplies within the Gaza Strip. This also means that the 1.8 million people who live in the Gaza Strip have poor living conditions. The situation is the Gaza Strip makes the news on a regular basis. Although, you should note that both parties (and Egypt) have their roles to play in this difficult reality.

Let’s fast forward to now – as you can see, both parties played their parts in the conflict.

Even if most people tend to want the two-state solution nowadays, there are still many problems to solve and this is also why peace hasn’t been achieved yet.

Did you know? You could get an extra Airbnb discount using this link! If you already have an account, you can create a new one. Thank me later!

So, where does this leave us?

As I said above, depending on the narrators, versions can be quite different. That said, recognizing the other state is threatening for both parties.

Peace won’t be achieved until both parties are willing to compromise, but more importantly, they must recognize and understand each other to build trust and tolerance.

Future of Israel and Palestine

Fortunately, several organizations are working towards a peaceful future between Israel and Palestine. I had the privilege to meet a few of them. I’ll focus on the two organizations that helped me understand the conflict and also gave me hope for the future.

Photo by No Filter Israel

Roots is a non-profit organization that works towards a brilliant ideology. It’s a movement of understanding, nonviolence and transformation among Israelis and Palestinians.

They believe in the fact that no peace can be achieved until they both understand each’s others side.

They organize meetings in the West Bank so Israelis and Palestinians can meet to create trust and partnership.

Considering Israelis and Palestinians live so close to each other, but in complete separation, they barely know about each other’s lives. Instead of creating more stereotypes where they only see one side of the story, the meetings help them understand better both realities.

You can read more about Roots, connect with them or even donate here.

Photo by No Filter Israel

Taghyeer is working towards social development and nonviolent resistance.

You can read more about Taghyeer, connect with them or even donate here.

The Things I Wish I Could Understand Better

These meetings and research left me with a few more thoughts which I’d like to share with you.

Within the state of Israel, Arabs and Jews are co-living without major issues.

For example, in the Old City of Jerusalem, you find four quarters in a 4 km perimeter – Jews, Christians, Muslims and Armenians.

It is also the case in Old Jaffa in Tel Aviv where Arabs and Jews are also co-living. In fact, there’s even the Arab Jewish Community Centre which I visited that focuses on tolerance, cooperation and trust.

That said, it is unfortunate to see how that same peace hasn’t been achieved everywhere.

It gives me hope though – if tolerance and trust can exist, we can all learn from it.

If Tel Aviv is known to have one of the biggest Gay Pride Parade in the world, some people would question this action – wondering if it was taken to make Israel look better worldwide when it comes to human rights.

After meeting Israel Gay Youth Movement members in Tel Aviv, we came to realize that there’s still a lot to be done in terms of LGBTQ rights within Israel, especially outside Tel Aviv. We still have hope for the future though.

That said, the Parade is a beautiful action when it comes to human rights. We would love to see the respect of human rights everywhere in this beautiful land too.

The conflict is old and there’s a lot to be done before peace can be achieved. I do have hope though. With associations like Roots and Taghyeer which act in the West Bank, there’s hope.

Unfortunately, when it comes to the Gaza Strip, it doesn’t seem that easy.

I hope this post answers your questions regarding the conflict Israel/Palestine and more importantly, I hope it didn’t offend you.

If you have any thoughts to share or questions, please, leave a comment. Remember that all comments should be “dipped in respect”.

Get your monthly (and funny) dose of adventures! Subscribe now! #YesPlease

Are you enjoying this website?  If your answer is yes, you should use my affiliate links to book your accommodation for your next adventure: Booking.com, Agoda and Hostelworld!

Disclaimer: This post may include affiliate links. Thanks to MediaCentral for inviting me to Israel. As always, all opinions are my own. Happy travels.

Top Reasons to Go to Barcelona

Celebrating Songkran in Koh Phangan, Thailand (& Where Else Can You...